Deep brain stimulation (DBS) is a surgery to implant a device that sends electrical signals to brain areas responsible for body movement. Electrodes are placed deep in the brain and are connected to a stimulator device. Similar to a heart pacemaker, a neurostimulator uses electric pulses to regulate brain activity. DBS can help reduce the symptoms of tremor, slowness, stiffness, and walking problems caused by Parkinson’s disease, dystonia, or essential tremor. Successful DBS allows people to potentially reduce their medications and improve their quality of life.

What is deep brain stimulation?

In deep brain stimulation, electrodes are placed in a specific area of the brain depending on the symptoms being treated. The electrodes are placed on both the left and right sides of the brain through small holes made at the top of the skull. The electrodes are connected by long wires that travel under the skin and down the neck to a battery-powered stimulator under the skin of the chest (Fig. 1). When turned on, the stimulator sends electrical pulses to block the faulty nerve signals causing tremors, rigidity, and other symptoms. 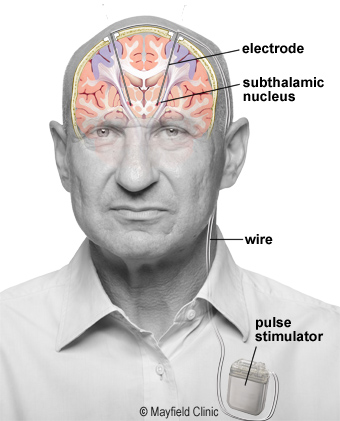